TEKVOX, an innovative supplier of audio/visual control solutions, announced today the TEK-UT, a special edition of its popular TekMonitor™ intelligent room controller, that performs dynamic transcoding of an RS232 command/control stream from one device format to another in real-time. 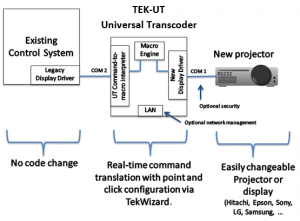 “Legacy A/V control systems in which no one has access to or can understand the original code are constant aggravations to our industry’s customers. It stops them from replacing their projectors or HDTVs without a complete code re-write” said Mike Slattery, Founder and CTO of TEKVOX. “The TEK-UT gives integrators and installers an affordable option to replace a display or projector by simply translating the old control stream to the new device’s format.”

The process of transcoding involves taking in a stream of information in one format (the source) and dynamically transforming it into an entirely different format (the output). Since it may be impractical or cost-prohibitive to reprogram a legacy control system to control a new display or projector, externally transcoding the old control stream to the new device’s format opens new opportunities for owners of legacy systems and the integrators that support them.

“The TEK-UT transcoder application is both intuitive and powerful” said Jim Reinhart, CEO of TEKVOX.  “Customers can save hundreds to thousands of dollars in rework as well as annoying down time versus having to crack open their existing A/V control systems.”

The TEK-UT kit is available now through authorized TEKVOX dealers and resellers and has a single unit MSRP of $325.

TEKVOX will be displaying its solutions at InfoComm 2015 in Booth 4372 held at the Orange County Convention Center in Orlando, Florida, June 17-19, 2015.  A live Press Conference will be held in the TEKVOX booth on Thursday, June 18th, at 3pm Eastern Daylight Time.

The original press release can be found here.